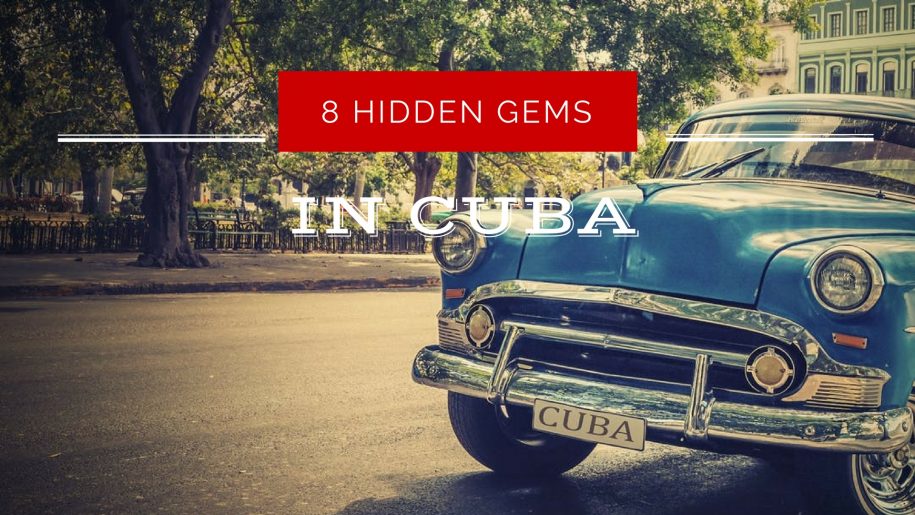 Some people look for a sense of authenticity when they explore a new destination – to see the so-called real side of a place. But come on… whether you’re staring up at the Empire State Building, or finding some isolated, trashy bar in Hell’s Kitchen populated by heavy drinkers with an average age of 70, they’re all the real sides of a place. The popularity of a tourist attraction doesn’t in any way diminish its authenticity. And yet, sometimes you do want to get a little off the beaten track, to see parts of a city that are not proudly emblazoned on the covers of all the tourist brochures. There are many hidden gems in Cuba that are interesting and kind of curious – not the sort of things you would expect to find on a glorious island in the Caribbean.

1. Not The Cuban Art You Were Expecting

Maybe the first item on this list can’t be considered as one of the hidden gems in Cuba, since you cannot fail to see it when you walk through Plaza Vieja in Havana’s Old Town. Known as Viaje Fantástico, this sculpture doesn’t quite dominate the plaza, but its unique subject matter means that it certainly commands attention. When you think of Cuba, there are a few things that will probably spring to mind – items of the rum and cigars and salsa and beaches variety. You presumably wouldn’t think of a naked woman holding a pitchfork and riding a giant rooster, and yet this is exactly what Viaje Fantástico depicts. The sculpture is the work of acclaimed Cuban artist Roberto Fabelo, and was installed in 2012. It’s wonderfully bizarre and original, and if it doesn’t quite make sense… well, does it have to?

Back in the 1970s, Cuba had advanced plans to power their country with nuclear energy. The plans were so advanced that over the course of the next couple of decades, an actual nuclear power plant was built in Juragua, on the road to Cienfuegos. The project fell apart in 1992 and the plant was never operational. All that remains of it is the weird sight of the reactor building (including its vast dome – which makes it look like a post-apocalyptic church) as you travel past. You can’t actually visit the building, but it makes for one of the more interesting hidden gems in Cuba.

3. Sword? Syringe? Or Just One of the Weirdest Hidden Gems in Cuba?

Jutting upwards from the earth in the Miramar district of Havana is a wonderfully odd structure. Designed by Russian architect Aleksandr Rochegov, the Embassy of Russia in Havana was designed in the constructivist style and opened in 1987 after nine years of construction. It was the Embassy for the Soviet Union until that particular union ceased to exist, at which point it became the Russian Embassy. It’s an odd sight, looking like a sword, or even a syringe. You can’t actually visit the embassy, but it’s such a striking (and large) building that you can easily see it from the street.

One of the trendiest hidden gems in Cuba is… well, a cave. What makes it interesting is that Discoteca Ayala (about ten minutes from the centre of Trinidad) operates out of the cave, so you can quite literally have a night out… underground. It’s very warm down there, and so you might find yourself needing to emerge from the cave a few times to cool down, but it’s going to be one of the most memorable nights out of your life. The club is named after Carlos Ayala. Heard of him? Maybe you assume that he was a famous Cuban artist or revolutionary? Nope. He was reportedly a serial killer from the late 1800s who used to hide in the cave.

5. Lenin on the Rocks

If you happen to be wandering around Regla (a district of Havana), you might come across a rather interesting sight. A massive bronze sculpture of Lenin’s face has been attached to a small, rocky hill, with Lenin looking gruffly outwards. If this wasn’t original enough, there are an additional 12 sculptures on the ground – 12 life-sized human figures, all in bold white, looking up at Lenin in awe. It’s one of the weirder national monuments in Cuba, although it’s not as well known as some of the others.

Not many people used to stop at Jaimanitas, a small village just out of Havana. That has slowly changed, and bewildered, amazed visitors wandering the streets are an increasingly common sight. The district was transformed due to the efforts of the Cuban artist José Fuster, whose work encompasses brightly coloured mosaics… everywhere. His own home is an explosion of colours, and this slowly spread out across the entire neighbourhood, making the place look like a psychedelic dream. The whole district now looks like a painting, something so amazing that it can hardly be real.

It’s not one of the most cheerful sights you’ll see, but a visit to the Presidio Modelo is a haunting experience. This so-called Model Prison closed in 1967 and was home to Fidel Castro during his detention there in the early 1950s. It’s an eerie place to behold and is now a national monument. The simple architecture adds a strong contradiction – a place of horror that is aesthetically beautiful. It’s on the Isla de la Juventud (Isle of Youth), just off the Cuban mainland.

8. The Most Comfortable Seat in the House

Ever wanted to enjoy a drink while… uh… sitting on the “bathroom throne”? We wouldn’t judge you if you did, and you can in fact do this at Cafe Fortuna Joe in the Miramar district of Havana. This place is something else, with seats made from all manner of things (such as a toilet… yes, really). There’s even an old car you can sit inside if you want to enjoy some privacy while having a drink at this brilliantly weird addition to our list of Cuba hidden secrets.

Do you have any questions? Please let us know in the comment section!

COVID-19 UPDATE
Flexible Payment Terms on New Bookings (1st May 2020 onwards) - We are currently offering flexible payment terms on our group and private Cuba tour bookings. Your deposit payment for any tours departing in 2020 or 2021 will be 100% refundable up until 4 weeks prior to your tour commencing. We will also allow the flexibility to change your departure date up until 31st July 2020, providing you give us at least 30 days notice.
Current Bookings (pre 1st May 2020) - You can transfer your booking to a future travel date without any penalties or administrative fees. Just contact us by email to confirm your changes.
DESIGN YOUR OWN ITINERARY HERE