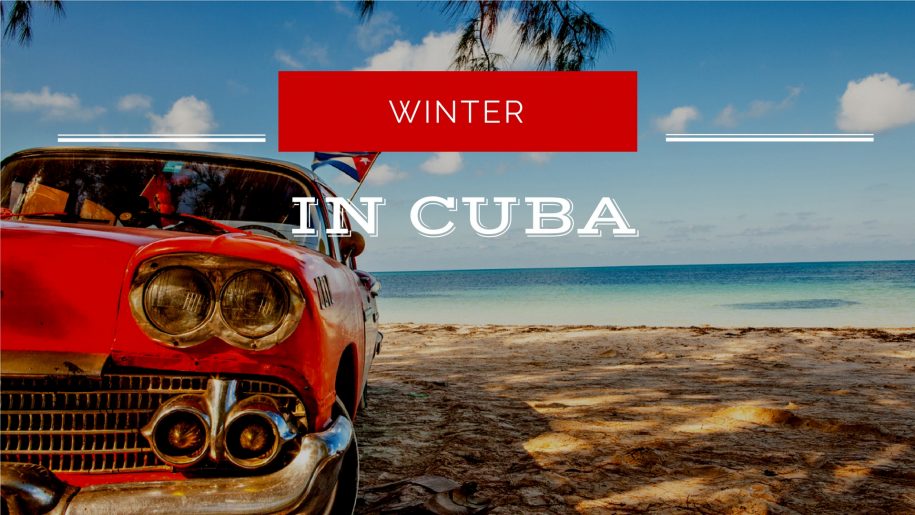 Isn’t Cuba a summer destination of sun, sea and sand? Not so, or more correctly, not entirely! The truth is Cuba is a phenomenal country to visit at any time of year. And as it turns out, there are a number of very cool reasons to visit Cuba in winter time too. Here we round up our top six reasons, starting with the all-important Cuban weather.

Cuba’s subtropical climate means the Caribbean’s largest island enjoys two main seasons, one wet and one dry, although there is little change in temperature between the seasons. As a rough guide, temperature’s during the winter (dry) months average a balmy 26° Celsius. They rise to around 31°C in the wet season. Even at night temperatures rarely fall below 10°C, making Cuba a great destination for those of you who like to travel without much luggage. You can leave those heavy jumpers and jackets back home!

More important than the temperature is perhaps the amount of rainfall Cuba receives. Rather obviously, the majority of rainfall is recorded during the wet season, peaking in July and August. For the rest of the year rainfall is limited, but even at its worst in rarely affects plans for longer than an hour or two.

2. Take to the water

The good temperatures of winter in Cuba don’t just encompass the country’s towns and cities, but extend to its waters too. The country’s sea temperatures, as well as its almost endless pristine beaches, make Cuba the perfect destination for a whole range of water sports and shoreline activities.

Whether you prefer a gentle paddle in the clear blue shallows, or setting your heart pumping with activities only suitable for true adrenaline junkies is more your thing, the waters around Cuba are just as fine in winter as in summer months. So why not grab this opportunity with both hands? Deep-water fishing, scuba diving, windsurfing, and snorkelling amid the colourful fish of the coral reefs are just some of the activities on offer.

The crème de la crème of these sites is Old Havana and its fortifications. No visit to Cuba is complete without a visit to Old Havana. Founded by Spanish colonists in 1519, less than 30 years after the first voyage of Christopher Columbus to the New World, Havana was constructed in Baroque and Neoclassical styles. Exemplified by the Gran Teatro (Grand Theatre), the Cathedral of the Virgin Mary of the Immaculate Conception and the Fort of Saint Charles (known locally as La Cabana), these early Spanish colonists spared no expense in creating a grand city in the style of the cities of their birth. The result has to be seen to be believed.

Less well known but no less remarkable is the Alejandro de Humboldt National Park, another UNESCO-listed World Heritage Site. The park, in the far east of the country, is an important area for endemic flora and fauna and is home to 28 endemic plant species as well as the Cuban solenodon – a rare venomous shrew-like mammal.

4. Take a ride in a vintage taxi

The long years of economic sanction upheld by the United States that followed Fidel Castro’s communist revolution in 1959 has led to something of a living museum feel to Cuba’s taxi fleet. Often regarded as being the largest collection of vintage American vehicles in daily use, these vehicles add an extra touch of class to Cuba’s street scene. With their drivers having to come up with ingenious work-arounds for unavailable spare parts, hailing a cab is a fantastically retro way to travel around Cuba in winter time.

5. Enjoy a drink with the locals

Despite its deep rooted Catholic heritage, Cubans enjoy a drink as much as the next person. Popping into a bar is a great way of getting to know the country and its people better on a winter’s evening – even if you only know a few words of Spanish.

What’s more, alcohol is very reasonably priced almost everywhere on the island. Locally-brewed (to international standards), brands of beer such as Bucanero and Cristal can be purchased from as little as 1 US$ in state-run shops to just a couple of dollars in most bars.

Cocktails are equally well-priced. The country is rightly proud of its production of rum, and it’s impossible to miss the different bottles of Havana Club, Cuba’s most popular rum, that line the back walls of bars across the country. Your best bet? Trying it in a traditional Cuban cocktail such as the mojito or the daiquiri – Ernest Hemingway’s favourite tipple.

Music and dance are incredibly important to Cuban culture. Performances continue throughout winter in Cuba, be it from teenagers on the decks of a night club, locally-run rumba competitions or specially choreographed hotel and restaurant events. Fusion of styles as broad as Spanish flamenco combined with modern hip-hop is a common occurrence.

In many ways, rhythm is far more important than any style. Cubans love strong rhythms, and as a result, dancing can break out almost anywhere at nearly any time. Locals will be happy to let you get involved, though be warned – their standards are high!

As you can see from our top six cool reasons to visit Cuba in winter time, whatever your interests the chance to enjoy winter in Cuba is definitely worth considering.

Do you have any questions? Just leave a comment below!