8 Cool Things You Can Only Get in Cuba 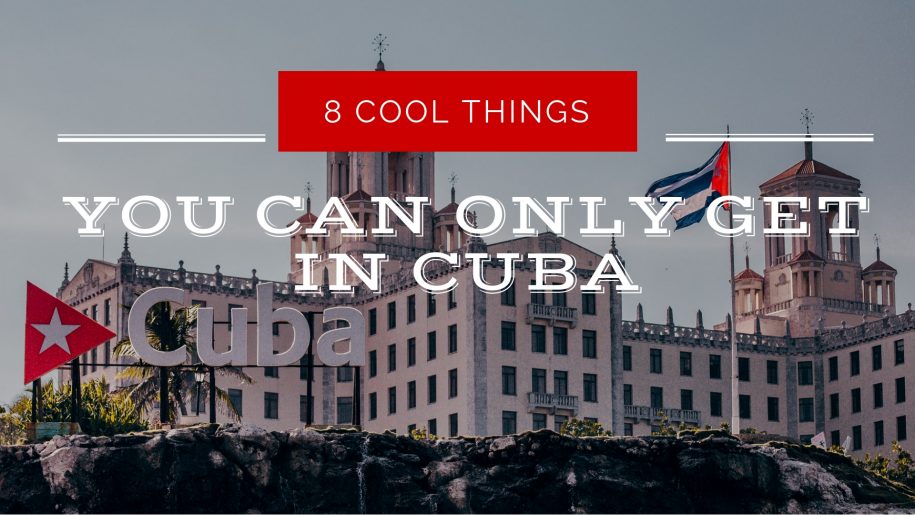 As one of the world’s most unique of destinations, it maybe comes as no surprise that this sublime Caribbean nation also offers visitors to the island an incredible list of intriguing products and souvenirs to remember your trip by. Many are things you can only get in Cuba, making them all the more special. Here’s our recommendations for what to look out for when you visit the island!

The flagship brand of Habanos Cigars, the birth of Cohibas is shrouded in secrecy, with the now famed El Laguito factory having started producing these cigars in the 1960s solely for none other than Fidel Castro himself. Right up until 1982 these special cigars were reserved for Castro alone, along with a handful of lucky friends. So highly-regarded were they, that Castro would gift them to important foreign dignitaries. Still banned outright in the US alongside Cuba’s other cigars, they have a limited international release and are therefore very difficult to find aboard, making them perhaps the most famous of things you can only get in Cuba. What makes them so special is the still secret methods used to produce them. What we do know is that the tobacco is hand-selected from just ten fields and that the ‘filler leaves’ undergo an additional fermentation to give them a supreme smoothness.

Although bands such as Buena Vista Social Club have managed to break into the international market, the tunes of the majority of Cuba’s music stars can still only be got on the island itself. As well as being able to enjoy the foot-tapping antics of jazz, salsa, and percussive sounds of traditional son Cubano music at bars and clubs across the island, you’ll find many acts also peddling their CDs between numbers on a night out (although recording quality does vary enormously). For a more authoritative exploration of the island’s musical heritage, check out stores such as Havana Si, on the capital’s Calle 23.

Coffee drinking is as integral to the culture of Cuba as tea drinking is to the British, and it’s a part of island life to have an espresso-like shot of coffee in the morning first thing in the morning, and another after dinner each evening, as you’ll soon discover as you explore the island through its casas particulares bed and breakfasts and paladares family-owned restaurants. Rich, strong, and distinctive in flavour, Cuba’s coffee is grown in small plantations in the Sierra Maestra Mountains, where much of the hard work continues to be done by hand. More importantly, the coffee is processed entirely organically, with no chemicals used.

A tosto– what? It’s well worth getting hold of a tostonera simply for the joy of baffling family and friends back home when you challenge them to come up with a use for this kitchen implement that’s a must in every Cuban household. But it becomes particularly useful if you plan to try your hands at traditional Cuban cuisine. So what is a tostonera used for? Seen those crisp, flattened, twice-fried pieces of plantain on Cuba’s street corners? They’re most commonly known as tostones. Getting an inkling of what a tostonera might be for now? That’s right! They’re used to flatten out the chopped up plantains, and can be found in wood, metal, and plastic versions in the island’s main department stores, such as Havana’s Mercado Cubalse in the Miramar neighbourhood.

There are a great many tourist destinations where visitors can encounter artworks created by local, often self-taught, artists, and Cuba is no exception. For sure it’s possible to find ‘souvenir’ paintings at most of the country’s major markets for as little as $20. But Cuba also offers visitors some very serious artworks, and pieces that hang from gallery walls can be purchased for as little as $100. Perhaps its because the communist regime has always placed such a heavy emphasis on the importance of culture, or perhaps its simple that Cuba has a very talented populace. Either way, the result is an extremely impressive output well worth taking home.

Though Che Guevara’s face may look out from T-shirts across the globe, where better to get hold of original Cuban revolutionary memorabilia, together with vintage wares as diverse as stamps and coins that in Cuba itself? Havana’s Plaza de Armas in the heart of the Old Town is a popular place to head for those seeking out a vintage bargain. The same square is also one of the best places of the island to pick up an original metal Cuban car licence plate (rather than the plastic versions sold elsewhere as souvenirs), a wonderful way to remember a ride in one of the country’s iconic classic vehicle fleet!

Also in the heart of Old Havana is the eighteenth-century mansion that is the salespoint for Habana 1791 perfumes, in addition to the company’s main lab, and museum. There are twelve main scents to choose between, all based on natural fragrances including rose, orange bloom, and (most fittingly) tobacco, sold in handcrafted glass bottles. However, should you prefer, the expert staff at Habana 1791 will also be happy to create a bespoke scent just for you, understanding your preferences and personality through a quick chat before the magic begins!

You can’t miss the handicrafts in Cuba, with most of the country’s craft markets packed with all manner of wood-based products. Not every item will be to everyone’s taste, but we definitely recommend having a rummage through the offerings of stalls such as those on Havana’s Calle Tacon. Ashtrays are easy to come by, given the island’s near obsession with cigars, but as are figures of Guevara and Fidel Castro, but you’ll also find superbly-carved chess sets and little village car models (a mix of wood and old soda cans) which we love and can be bought for less than $10. As you will now know, there are some very cool things you can only get in Cuba. So if you’re planning a visit to the island, take note, and keep your eyes peeled! You won’t regret it!