What to Do in Cienfuegos: Our Top 8 Located on Cuba’s stunning southern Caribbean coastline, Cienfuegos is unique in Cuba in that it was settled by immigrants from France rather than from Spain, the country’s colonial ruler. That French heritage continues to demonstrate itself through the Parisian style of many of the city’s buildings, and in the names of streets in the UNESCO-listed old town in particular. Named after the high ranking soldier Jose Cienfuegos, the city is also commonly called La Perla del Sur, ‘the pearl of the south’. But should that not be enough for you, the uninhabited wilds of the extraordinary Zapata Peninsula – home to the famed Bay of Pigs – lies just a short distance away by road. Intrigued? Here’s our lowdown on what to do in Cienfuegos and its surrounds. Playa Giron, or the Bay of Pigs, holds an important place in Cuba’s revolutionary history as well as being a beautiful location in which to relax. In 1961 the palm fringed bay was the landing point for an anti-Castro counter-revolutionary force backed by the US intelligence agencies. Castro’s communist forces managed to stop the invasion becoming a successful one after three days of fighting, a time portrayed in more detail at the Playa Giron Museum. Tanks and aircraft used in 1961 are on display outside, while inside you can discover how the counter-attack took hold and how the invasion affected the local civilian population.

2. Snorkel at the Bay of Pigs The Bay of Pigs is also an area known for its underwater wonders, so if you’re wondering what to do in Cienfuegos consider snorkelling at the Bay of Pigs. You can snorkel just offshore, and you’re almost guaranteed an abundance of colourful fish. You’ll also discover a huge array of coral on reefs starting just 3 metres down and accessible from the beach itself. What’s more, the clear turquoise waters have very little current, making them perfect for simply floating on the surface as you gaze down into another world.

Built to resemble an indigenous Taino tribal village, there are a series of 50 wooden-built huts with thatched roofs on stilts over the water.  There is also 32 sculptutes depicting native wildlife. Only accessible by boat, which glides through Treasure Lagoon (Laguna del Tesoro) on route, the hustle and bustle of central Cienfuegos is left behind at the quayside, meaning your time is spent marvelling at this hidden gem on the Cuban coast. 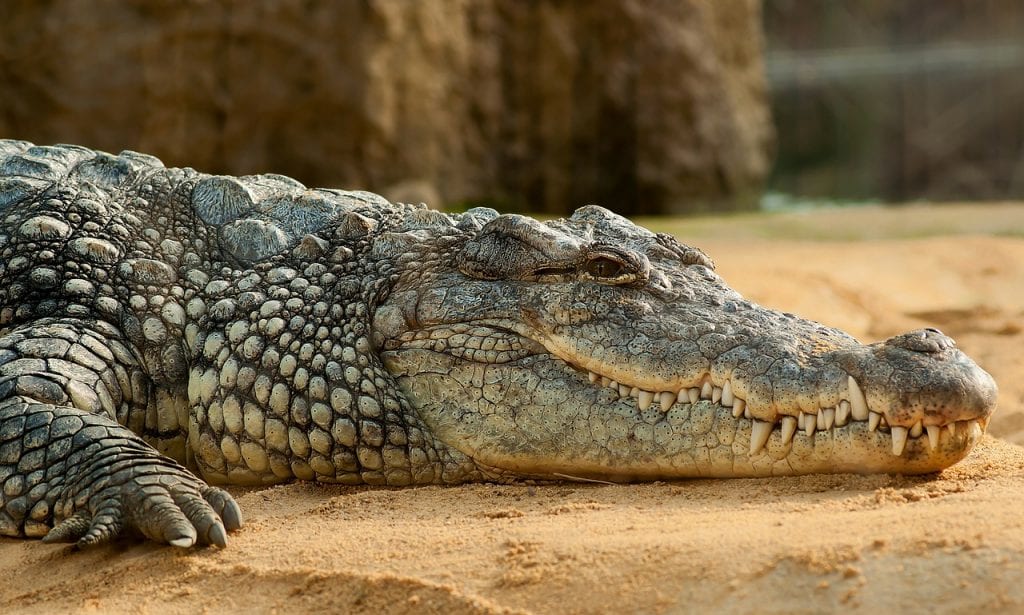 Should you be after a little more adrenaline-fuelled excitement when considering what to do in Cienfuegos you can do a lot worse than visiting Guama Crocodile Colony. Situated amid the waters of Treasure Lagoon, it is run by the Ministry of Fishing. Set up in the 1960s to help preserve endangered species, the colony is now home to more than 10,000 individual animals. They belong to two different species of crocodile, one native to Cuba, and the other a caiman from Latin America.

5. Hit the streets of Cienfuegos with a guide The wide boulevards and beautifully laid out parklands of Cienfuegos have long been a draw to visitors wondering what to do in Cienfuegos, and there’s perhaps no better way to delve into the sights, sounds, and smells of the city than on a guided city centre walk. Take in sights including the Italianate Tomas Terry Theatre on Plaza de Armas opposite Parque Jose Marti, and the impressive edifice of the nineteenth century Catedral de Nuestra Señora de la Purísima Concepción. You’ll also be told the history of the Ferrer Palace, stop at the architectural jewel that is the Palacio de Valle, and visit Cuba’s only triumphal arch, built to commemorate Cuban independence.

6. Take to the waters of Guanaroca Lagoon Guanaroca Lagoon is a salt water lake to the southeast of Cienfuegos formed by the River Arimao before it reaches the waves of Cienfuegos Bay. A protected area of land for many years, it boasts a profusion of birds, fauna, and flora. Experts have counted more than 170 different bird species on and around the waters, including the country’s national bird, the tocororo. Most famously, the lagoon is home to a huge colony of around 2,000 flamingos. If you’re lucky, there’s also the chance to catch sight of a manatee.

7. Cool off at El Nicho Waterfalls El Nicho Waterfalls are located within the boundaries of the hilly Gran Parque Natural Topes de Collantes, roughly 1.5 hours from Cienfuegos. Cascading impressively even during the dry season, there is a large natural pool at the base of the falls where it is possible to swim, as well as a number of other smaller equally-inviting pools. To get to them you’ll follow the trail through dense forest which is the natural habitat of various bird and lizard species. Continually a short way beyond the falls and you’ll have the added benefit of a viewpoint looking over the surrounding valley too. Should you get hungry, there’s a small restaurant serving authentic Cuban cuisine. So should your list of what to do in Cienfuegos include getting away from the heat of the city, you know where to head. Last but not least on our list of what to do in Cienfuegos is a visit to Cienfuegos Botanic Gardens, the Jardin Botanico de Cienfuegos (or Jardin Botanico Soledad). Just 14 kilometres from the centre of Cienfuegos, the gardens were founded in 1901, making them one of the oldest anywhere in Cuba. Covering an area of almost 100 hectares, they house over 2000 species of tropical and exotic plants, including 400 beautiful orchids

The answer to what to do in Cienfuegos

If you had been struggling with what to do in Cienfuegos, you need look no further than our list of the top 8 attractions the city and its surrounds have to offer. From intriguing history and architecture, to amazing natural sights, there’s a reason Cienfuegos is also called the ‘pearl of the south’.