Best Things to do in the Zapata Peninsula 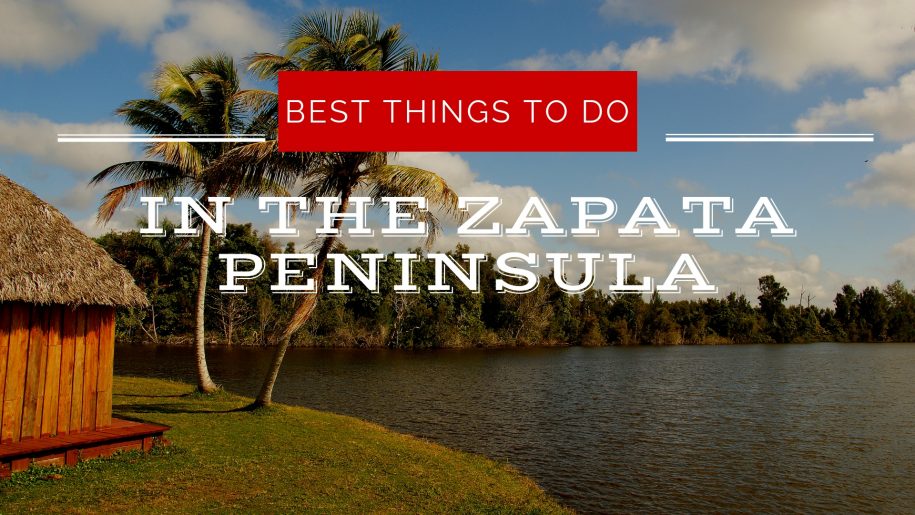 The 4,200 square kilometres of the Zapata Peninsula – or Peninsula de Zapata – lie on Cuba’s southern coastline, south-east of Havana, and west of Cienfuegos. Largely uninhabited, its one of the best places to head in Cuba for wildlife encounters and bird watching, as well as scuba diving, although the country’s more recent revolutionary history is still never far away. Though wild, the Zapata Peninsula is easily reached from Havana and much of the rest of the country thanks to the proximity of the A1 highway. But what will you find when you get there? Here’s the best things to do in the Zapata Peninsula!

Unwind on the beaches of the Zapata Peninsula

Don’t let the Zapata Peninsula’s other name – Zapata swamp – put you off, the region has plenty of fine, palm-fringed beaches on which to unwind for a couple of days. Located within both a UNESCO Biosphere Reserve and National Park, you can be sure that their soft bleached sands are going to be unspoilt, with nature spilling right down to the clean, warm waters. On of the easiest to get to is Playa Larga. Not only is this stretch of sand at the end of the road heading south, but it also acts as the location for the headquarters of Parque Nacional Ciénaga de Zapata, making it a great place to base yourself, with plenty of beachside accommodation options and activities on offer.

The most treasured areas of the Zapata Peninsula are protected by the Ciénaga de Zapata National Park, which can be explored independently (provided you bring your own car) or as part of a tour. You’ll also need a guide as escort, which is easy to arrange at the park headquarters in Playa Larga (another excuse, if one was needed, to spend a couple of days on the beach!). Unsurfaced roads crisscross the park, letting you get up close and personal with all manner of animal and bird species, from pelicans and egrets, to falcons and Cuban Trogons. The mangroves here abouts also provide a habitat for endless numbers of crabs, giant toads, and the Cuban crocodile, which historically only live within the confines of the park.

The Zapata Peninsula’s warm clear waters make it the perfect place to get the swimsuit out and head into the shallows and beyond, either with snorkel and mask or with full scuba diving equipment in tow. You’ll find the best choice of kit rental between Playa Larga and Playa Giron, though there are plenty of places you can pretty much park up and jump straight in too. The coral reef is close to shore, making it accessible even for those who find themselves less comfortable in tidal waters, with myriad colourful tropical fish going about their business in the sublime underwater environment.

If you failed to catch sight of a Cuban crocodile in its natural environment in the national park, have no fear! You’re guaranteed a sighting at the Criadero de Cocodrilos crocodile farm. Located just off the main road to Playa Larga, the farm has played a major role in bring the Cuban crocodile back from extinction since it was founded in 1962. With a focus strongly on conservation and breeding, visitors can see the crocodiles at all the different stages of life, from youngster to fully-grown adult, and even hold a juvenile for a photo op!

Commemorate the revolution at the Bay of Pigs

Playa Giron on the Bay of Pigs has some exquisite vistas, and wonderful snorkelling and diving, however its probably best known as the site at which US-backed counter-revolutionaries stormed the Cuban coast in a failed attempt to overthrow Fidel Castro’s regime in 1961. Never one to let an opportunity slide, the Cuban government has since erected a number of propaganda boards, while the Museo de Playa Giron gives the full lowdown, and has exhibits that include a plane and weaponry used in the battle. Don’t miss the 15-minute film either, which gives a real sense of the heightened tensions the Cold War leading to the Cuban Missile Crisis the following year.

Glide across the Laguna del Tesoro

The Laguna del Tesoro, or Treasure Lake – so named after legends of the indigenous Taino people hurriedly hiding their gold at the coming of the Spanish conquistadors in the 1500s – is also not to be missed. The fact the lake is only reachable by boat only adds to the intrepid feel, while its eastern side is home to the Villa Guama tourist resort, spread over a handful of small islands and constructed to resemble a traditional Taino village. The lake is also popular with big game fishermen and women, thanks to its stock of carnivorous largemouth bass, which can grow up to 75 cm in length and weigh close to 11.5 kg!

Say what? No, don’t pack your bags and jet off just yet, because the former sugar mill town of Australia lies in the Zapata Peninsula. The sugar mill office, the forward headquarters of none other than Fidel Castro himself during the Bay of Pigs invasion, now houses a small counterpart museum to that at Playa Giron, while there’s also a small museum dedicated to steam locomotives too, displaying rail stock originally used to transport sugar cane to the mill. While in Australia you might also fancy checking out Finca Fiesta Campesina, a slightly bizarre blend of theme park and county fair, with a small ‘zoo’ and bull-riding, which is worth a stop for the coffee and sugarcane alone.

Far from being a mercurial swamp, the Zapata Peninsula offers visitors a wealth of extraordinary experiences. Whether you’re eager to soak up the sun on the region’s beaches, encounter wildlife on tours or the crocodile farm, delve beneath the waves while snorkelling or diving, trace Cuba’s turbulent revolutionary history, or grab a rod and reel, there’s definitely something for you in the Zapata Peninsula!