The Most Popular Cuban Cities for Tourists to Visit 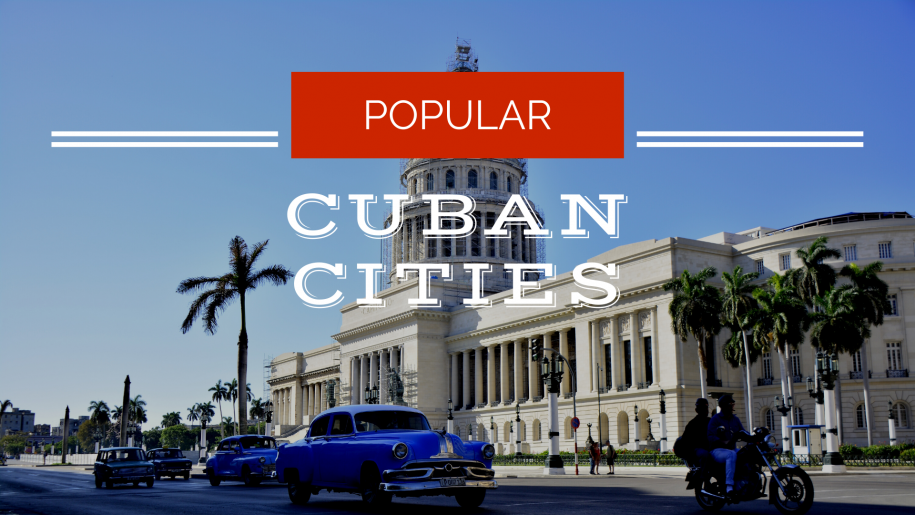 Cuba is the largest island in the Caribbean, stretching almost 800 miles from west to east. It’s an island nation with more than its fair share of intriguing cityscapes that are just waiting to be explored. But what are the most popular Cuban cities for tourists to visit and why? Check out our what to do guides here to find out more about Cuba’s best-loved destinations and start planning!

Havana: any list of popular Cuban cities must start here!

Havana remains the main port of entry for most visitors to Cuba, however the presence of the international airport and cruise terminal isn’t what makes Havana one of the most popular Cuban cities for tourists. The reason visitors stick around after arriving is for the sheer depth of important sites dotted about the Cuba capital.

At its heart sits the UNESCO World Heritage Site of Habana Vieja, the old town constructed by the first Spanish colonists on the island, and still protected by stout defensive walls. Further afield, visitors are able to explore the lively neighbourhoods of Vedado and Miramar, before delving into the collections of the country’s best museums, and taking in artworks as varied as Fusterlandia, Callejon de Hamel, and the propaganda posters that have hung in the capital since Castro first took power in 1959.

People sometimes ask is Havana safe? It’s in fact one of the safest cities in Latin America, however as with anywhere you travel in the world common sense is your greatest asset. So relax and enjoy this amazing destination!

Sometimes called the ‘Pearl of the South’, it’s no surprise that Cienfuegos is also one of the most popular Cuban cities for visitors to the island. Located on the island’s south coast, the city is unique in Cuba for being founded by French rather than Spanish settlers from the early 1800s onwards.

As a result, you could be mistaken for thinking you’ve ended up in Bordeaux or Marseilles, with wide boulevards named after eminent Frenchmen lined with buildings that wouldn’t look out of place in the suburbs of Paris. Add to this its fine setting on the Caribbean Sea and a spirit all of its own, there’s reason enough to spend some time in Cienfuegos!

Think of Cuba and one of the first things that comes to mind are probably Cuban cigars, which have touched the lips of everybody from Castro to Hemingway, Churchill to JFK. Much of the tobacco that goes into these famous exports is grown amid the lush landscapes that surround Vinales. It makes Vinales a great place to discover largely unaltered agricultural practices, and learn more about the work that goes in to producing a single cigar.

The nearby Valle de Vinales National Park protects fine mountain vistas dotted with limestone outcrops known as mogotes (and the colourful Mural of Prehistory). It’s a great place to stretch your legs with a short hike, or to explore caves that once acted as refuges for slaves that had fled from nearby the plantations.

Known for the beauty of its pastel-coloured colonial structures and cobblestone streets, particularly around Plaza Mayor, Trinidad is an extraordinary survivor from the period when its sugar manufacture was the envy of the world. With music seeming to ooze from every doorway, and several Casas de Musica in which to enjoy the local rhythms come night time, Trinidad offers a gateway into Cuba’s culture as well as insight into an important part of its history in the Valle de los Ingenios.

Here, somewhere in the region of 70 historic sugar cane mills lie in various states of disrepair. The most well known one is the 45-metre-high Iznaga Tower which provides a spectacular overview of the whole area.

One of Cuba’s few major cities not located on the coast, SantaClara is still one of the most popular Cuban cities as a result of a number of major attractions. The piece de resistance, almost literally, is the Mausoleum and Memorial to Che Guevara, another leading figure in the country’s revolutionary history. Bizarrely, the whereabouts of his body was unknown until 1997, when it was rediscovered in Bolivia where he was executed. His remains were then returned with great pomp to Cuba, and interred with full military honours in the specially-built mausoleum overlooking Santa Clara, the site of an important victory during the revolution.

Dating back to 1528, Camaguey’s maze of dead ends and narrow winding streets stems from the need to protect the fledgling city from pirates who had already set the city alight at least once. Much of the delight of a visit here is getting lost among the authentic alleyways, where you can find everything from ballet schools to boxing gyms. These alleys lead to a series of stunning squares, like pearls on a necklace, which are where you will find many of the city’s colonial-era churches, museums, and parks.

The second-largest city on the island, Santiago de Cuba lies close to the island’s southernmost point, some 500 miles east of Havana. One of the original seven settlements founded by the Spanish, it was founded in 1515, less than a generation after Christopher Columbus first anchored off the Cuban coast.

Boasting another of Cuba’s UNESCO World Heritage Sites, the seventeenth-century San Pedro de la Roca fortress, Santiago is also one of the most popular Cuban cities because of its links with Castro’s revolution. It was from the balcony of the City Hall here that Castro declared the revolution against dictator Fulgencio Batista victorious, and nearby that men including Fidel Castro himself and national poet José Martí are
interred at Santa Ifigenia cemetery.

Due to its location, Santiago de Cuba is certainly one destination you should consider visiting if you are going to be spending two or more weeks exploring Cuba.

Often overlooked because of its location in Cuba’s far east, we couldn’t end our exploration of the most popular Cuban cities without mentioning Baracoa. Still something of a hidden gem, Baracoa is the oldest Spanish settlement in Cuba and the site where Christopher Columbus first landed on the island in November 1492, during his first voyage to the New World.

Situated on the idyllic Bay of Honey, today Baracoa maintains much of its historic charm. Only linked to the rest of Cuba by road in the 1960s, it is a place to relax amid the beauty of the surrounding mountain range, hike to cooling waterfalls, breath in the heady scent of tropical planting that includes banana and coconut, and perhaps sample the chocolate that is grown in the area.

Like Santiago de Cuba, Baracoa is certainly a destination to consider visiting if you are going to be spending 2+ weeks exploring Cuba.