7 Cool Things Not to Miss in Cuba 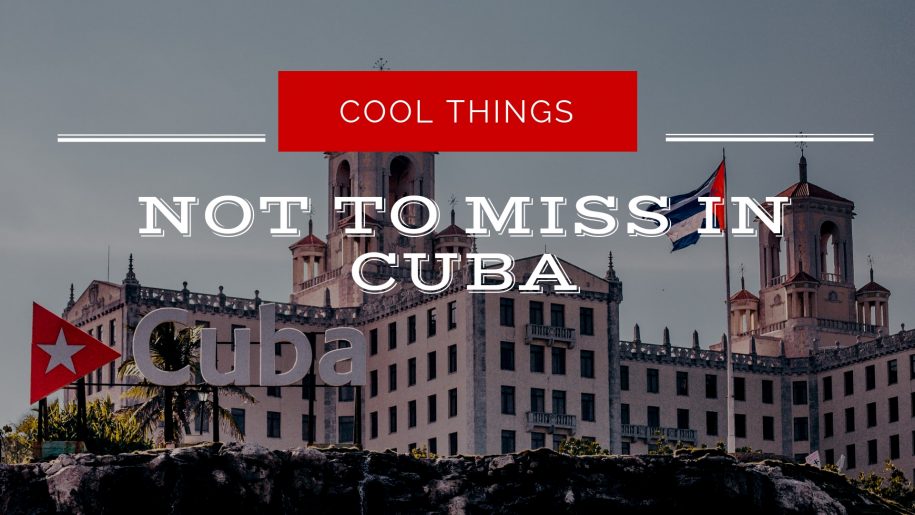 Cuba has been beguiling visitors to its shores since long before the Castro-led revolution of the late 1950s and early 1960s made it perhaps the world’s most unique tourist destination. The largest island in the Caribbean, it boasts more UNESCO-enshrined World Heritage Sites than anywhere else in the region. But there’s also a staggering array of beautiful beaches, lush rainforest, and beautiful colonial cities to explore. Check out our list of the 7 cool things not to miss in Cuba to make the most of your journey to the island!

No trip to Cuba is complete without a tour of Habana Vieja – Old Havana – on foot or by one of the many classic American cars turned taxis that haunt the capital’s streets with the low rumble of their engines.

One of the oldest colonial cities anywhere in the country, Old Havana proudly wears the name of a UNESCO World Heritage Site. Dating back half a millennium, you’ll find the area surrounded by high defensive walls, and literally festooned with baroque and neoclassical buildings around Spanish-style squares. You won’t want to miss the pre-revolutionary seat of government, El Capitolio, eerily similar in style to that in Washington DC, or the thriving book market on Plaza de Armas, to name just two of Old Havana’s wonders.

The incomparable landscape around the township of Vinales is about as far removed from the colonial wonders of Old Havana as its possible to get. Unaltered for what seems like forever, it is a landscape that combines verdant jungle planting with small traditional farms amid craggy and often sheer-sided rock formations known as magotes. The pace of life seems to have changed little too, and you won’t see anyone in Vinales going anywhere very fast.

A great place for trekking, with a series of criss-crossing paths, the wonders of the area continue underground too. Vinales is home to the Saint Thomas caves, the second largest cave system in the Americas. Stretching 46 kilometres across eight separate levels, the caves are a treasure trove of natural rock formations, as well as centuries-old murals created by pre-Colombian Indians.

It may not be the quickest mode of transport you can find in Cuba, but the Hershey railway remains one of those things not to miss in Cuba. Constructed by the American chocolate manufacturers to transport sugar from the fields to the capital before the revolution, today the Hershey railway is the only remaining electrified rail line in the country.

It runs 92 kilometres between Matanzas and along the north coast to Havana’s Casablanca suburb, by way of the brightly coloured wooden clapboard homes of Camilo Cienfuegos – more commonly called Hershey. Not only is the countryside along the route amazing, but as one of the only ways to get to Matanzas, the Hershey railway is also the perfect way to interact with everyday Cubans.

Situated at Cuba’s far eastern end, not many visitors to the island make it as far as Baracoa, although it was one of the first destinations for the Spanish conquistadores after they had crossed the Atlantic. Visited by none other than Christopher Columbus himself, it was Spain’s first settlement on the island, and Cuba’s first capital too.

Widely known as the greenest city in Cuba as a result of its mix of palms, bananas, and chocolate plants, Baracoa is also blessed with a series of rivers, and taking a boat trip to the tall cliffs at the mouth of the Yumuri River is a definite must. Another of Baracoa’s things not to be missed in Cuba is Salto Fino just a few kilometres away. The Caribbean region’s tallest waterfall, water cascades an amazing 305 m from top to bottom.

5. The French influence of Cienfuegos

The Spanish weren’t the only Europeans to leave their mark on Cuba. The French have played their part too, with Cienfuegos – the ‘Paris of the Caribbean’ – founded by Don Luis de Clouet in 1819 and settled by Frenchman from Louisiana (then French territory) as well as mainland France.

The result is unique for Cuba – a city with a markedly French style and influence among the wide boulevards and extensive parklands. The city has one of the world’s best collections of neoclassical buildings at its heart in the downtown area, and an impressive historic fort – the Castillo de Jagua, at the mouth of the bustling harbour. Cienfuegos is certainly another of those things not to miss in Cuba!

You don’t have to be a lover of his literature to find Hemingway’s former farmhouse an absorbing experience, with the Nobel winning author’s life on the island straddling the time of Castro’s revolution. Hemingway lived on Lookout Farm for much of the 1940s and 1950s, and wrote some of his most famous works, including The Old Man and the Sea in the house.

Much revered in Cuba, Hemingway’s home has been returned to its former glory by the Cuban authorities. The rooms contain much of their original contents, including thousands of books that belonged personally to Hemingway, while you’ll also find his beloved boat, the Pilar, in the grounds.

Cuba’s communist takeover rightly plays a major part in any visit to the island nation, and a visit to the Mausoleum to one of its most famous sons – Ernesto ‘Che’ Guevara – should be high on anyone’s list of things not to miss in Cuba. For someone so famous its interesting to note that Guevara’s remains were only identified in 1997, thirty years after he died in fighting in Bolivia.

Back in his adoptive homeland, the mausoleum is situated on an attractive hill overlooking the city of Santa Clara, where you’ll find a seven-metre high bronze statue of the revolutionary keeping watch. Not far away you’ll also find a military supply train derailed by Che at the start of the revolution.

Cuba offers its visitors almost endless possibilities of what to see and do. Here we’ve helped narrow down the list for you, with our list of the 7 cool things not to miss in Cuba.